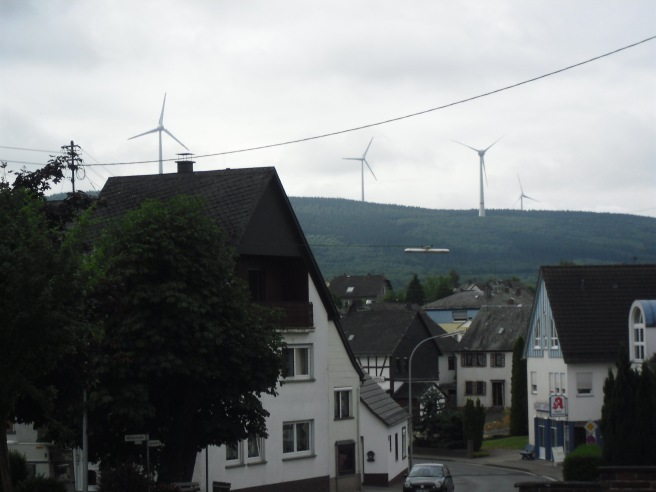 Renewable energy projects are increasingly realized worldwide as part of a global strategy to reduce emissions from fossil fuels and to reduce dependence on imported fossil fuels such as natural gas and oil. However, the transition towards renewable energies is not without problems. For example, wind energy projects in forests are an emotional topic in different parts of the world, and can develop into serious conflicts. Conflicts about renewable energy projects are an important topic from a sustainability governance perspective. The governance of wind energy conflicts is an important issue in the transition towards renewable energies. As part of my PhD project, I examined wind energy conflicts in forested landscapes in Maine, USA and Rhineland-Palatinate, Germany. Between summer 2014 and beginning of 2015 I spent 8 months at the School of Forest Resources at the University of Maine, where I did a case study on wind energy conflicts in forested landscapes as part of my PhD research.

Conflicts over wind energy projects in forests are complex, often involving many stakeholders, such as forest owners, local residents, wind energy companies, nature conservationists and recreationists. Forty-six interviewees from Rhineland-Palatinate and Maine shared their experiences and perspectives on wind energy conflicts with me. Surprisingly, the arguments of involved parties were similar in both regions. Even though differences in the overall governance structure made for some slight differences in decision-making processes in the case study regions, wind energy conflicts turned out to be quite universal (at least in the cases of Maine, USA and Rhineland-Palatinate, Germany).

For example, transparency, or rather a perceived lack of transparency in decision-making, was mentioned in stakeholder interviews in both cases as an important factor in the development of conflicts and controversies around wind energy projects:

“What we’re speaking to is really a sore spot in this town because we would argue and we wouldn’t never back down on that, they kept it secret for a year, they kept it secret for as long as they could to get the ordinance in favor of the developer, and the developer kept it secret to build his alliance and that really matters in terms of how everybody feels about it once they come aware. It would have been much more respectful of the town government to once they were being asked by a developer to consider a huge project, which is way, way out of proportion out of anything that’s ever been going on in [name of the town]. If you’re a small town in Maine and a gigantic development project is coming into town, I feel that they are absolutely obligated to make that as public as possible from the first idea. From the conception of it and they did absolutely the opposite. There was nothing and we are 3,000 feet away from the project. We would be hugely impacted if they went up and they had, they never showed us any respect at all in that regard.”

“We’re a state that loves its local control, so, for better or for worse, that’s what we have. You know, there are times when local control is great because those communities understand the needs, wants and desires of their community. Sometimes it can be a draw back if you’re trying to make sort of a systemic change in the way a society operates. So, for example, if you’re trying as a society to move away from fossil fuels and into more clean energy, sometimes local control can be challenging. But that doesn’t mean that we should do away with it.”

However, other interview participants did not share the preference for local decision-making. Consideration of nature conservation interests was seen as being better realized at higher governance levels:

“Everything concerning the protection of species cannot be considered at the local scale. Especially if it is a mobile species, as bats and birds, then you just have to have the greater perspective. Check main occurrence, where are the main migratory lines.”