Norway is a country with an interesting energy profile. It is known to be rich on oil and gas, which now account for about a quarter of Norway’s GDP and almost half of its exports by value (The Economist, 2015). Despite rich oil and gas reserves, Norway’s domestic energy supply is dominated by hydropower (nearly 40%) (IEA, 2011). In light of a recent encounter with Norwegian energy transition researchers, however, it seems to me that Norwegians are starting to redefine their relationship towards oil. In October 2015 I attended the conference “Beyond oil” in Bergen (http://spacelab.b.uib.no/conference-beyond-oil/). The conference name itself suggests that Norwegians are starting to seriously think about alternatives and ways to realize a transition to a society beyond oil.
Joining the conference, I was especially inspired by three new perspectives that I believe are worth sharing:

1.) Respect for oil workers
I learned that Norwegian professionals in the oil sector, once a highly respected and prestigious workforce, have lost their good reputation. One of the two speakers, who mentioned the current “shaming” of oil workers in Norway, was arguing for showing respect for those employed in the industry. He mentioned the pioneer oil divers, who installed pipelines, took samples etc. – some of whom died in the course of doing their job. The idea of acknowledging work done by oil workers seems rather new in the current energy debate. Could we possibly introduce this way of thinking into the German discussion about energy supply, e.g. in the case of coal workers or workers in the nuclear power sector? The speakers went even further, and explained the idea to create new climate jobs and to address the dilemma of losing traditional jobs along the path to climate neutrality. I do like the idea of acknowledging what has been done by the (oil) workers for us, not only have they worked and sometimes still work under precarious conditions, but by doing so they secure(d) our energy supply and push(ed) economic prosperity. By taking care of them we would possibly enhance the acceptance of renewable energies and counteract resistance as we take a new and more sustainable energy pathway. It might be one way to actually work together and not against each other. It would also demonstrate that we implement the idea of sustainable development more holistically, by also taking care of the social pillar.

2.) Leaving the oil in the ground.
This is a radical and challenging idea. There is no global agreement of regulating or maintaining resources in the ground in individual states. The international community has no legal jurisdiction to decide how e.g. oil and gas discoveries should be regulated. Every state has the right to development (“Declaration on the Right to Development” by the United Nations, 1986). I learned that Kenya has just recently (2012) discovered oil. Companies are still in the exploration phase, so not actually extracting the oil from the ground. While discussing with Kenyans the idea of leaving the oil in the ground, researchers discovered that it is considered a rather absurd idea. Leaving resources in the ground seems quite a radical idea compared to the current way of thinking, but I do think that it is an idea worth discussing, and one which also arises when we think about new methods such as fracking for shale gas or extracting oil from tar sands.

3.) Broadening the discussion for a society “beyond oil”
It seems that in Norway the discussion about a society beyond oil is taking place on a relatively large scale, and taking a holistic view on things. In Germany, in contrast, the debate appears to be narrowed down to a few aspects, with energy supply by renewable energy dominating the public debate. However, speakers and participants at the Bergen conference had an even broader view on the issue of a society beyond oil, also thinking about production and consumption, corruption and justice with respect to energy access, among others. I think that the discussion in Germany could benefit from such a broader perspective on a society beyond oil. 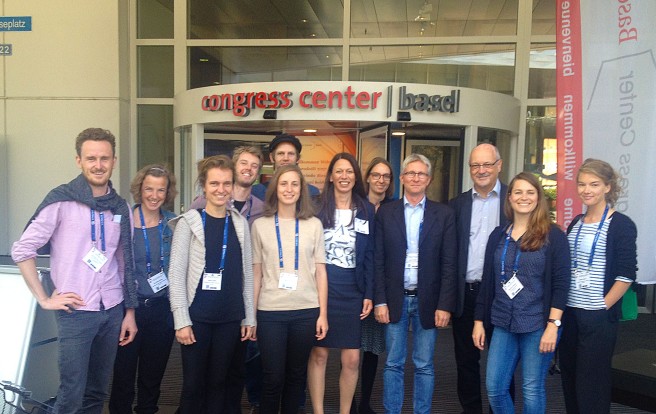 The delegation from Leuphana University at the International Transdisciplinarity Conference in Basel, 08-10 September 2015

Julie Thompson Klein’s keynote opened this year’s International Transdisciplinarity Conference (ITC) in Basel, Switzerland, tracing back the beginning of the transdisciplinarity (td) discourse to the 1970s. Navigating through almost half a century of discourse, Julie Thompson Klein named and connected key publications, key terms and concepts as well as key players in the field.

Her lecture suggested that there is a shared understanding of td-research and that there might be even something like a td-community.

However, the following three days of conference left us with the observation that this is not the case: With regard to presentations, workshops and panel discussions, the field of td-research appears as a kaleidoscope of diverse understandings of transdisciplinarity as well as of different transdisciplinary research approaches – with no coherent use of terms.

While some argued that, comparable to a boundary object, something like a td-body of knowledge and commonly used td-concepts already exists (e.g. Schläpfer, University of Zurich), others feared that a common td-theory could become so big and complex that it is no longer possible to apply. Yet others argued that a universal td-theory is an impossible goal to reach due to the fact that td-research is always context-driven (e.g. Engbers, Leuphana University Lüneburg). Instead td-scientists shall embrace and make use of the conceptual td-pluralism as well as of its context-dependency, saying: There is no one transdisciplinarity (DiGiulio, University of Bern).

As part of this discourse three major claims were brought up by the participants of the conference to handle the fragmented field of td-research:

To sum up, one could say that the research presented and the discussions on the conference reflected this on-going definitional debate of both the transdisciplinary research mode and the persisting plurality of practical approaches to transdisciplinarity quite well.

But we (together with Herberg, Leuphana University Lüneburg) recognized at least one joint characteristic of the td-community: despite the many ambivalent concepts and approaches, the conference was shaped by a culture of agreement and tolerance. The reactions on a presentation for instance would almost entirely be benevolent, with very few or no critical inquiries, comments or questions on research practices, methods etc. being made. While such a culture provides a great basis for mutual knowledge exchange on the one hand, it leaves only limited space for constructive confrontation and fruitful contestations on the other.

Picking up on this observation and linking it to the fragmentation of the td-research field we propose a culture of critical and constructive contention instead. We see great potential for the td-community by developing a respectful form of scientific criticism as it is common within “classical” disciplines (even though the “respectful” is not always given in every context). Adopting the perspective of Karl Popper* we would like to strengthen: Scientific quality (regardless of the particular research mode) can only be enriched by mutual critique, by contesting each other and each other’s concepts. Appreciative critique could also help the community to get into a constant practice of clarifying quality criteria than to just claim them and discuss about them on an abstract, theoretical level.

If you are interested in the plurality of td-research, but also in indicators and patterns: stay updated with our research project MONA, find our presentation at ITC-Conference here.

This week, a Nature article was brought to my attention. The article was called ‘Australia is ‘free to choose’ economic growth and falling environmental pressures’. The key message of the paper is that Australia can continue to experience economic growth while tackling environmental challenges by pursuing technocratic fixes to these challenges. Over on ideas4sustainability, Joern Fischer has already written a very nice post about the flaws of a technocratic approach. He also outlines why these flaws have lead us to put together the Leverage Points project. To not repeat Joern, and to avoid writing a very long post, I have decided to just highlight my concerns with one specific section of the paper.

The section of the paper is called ‘Policy choices are crucial, not changes in values’. The authors argue that economic growth can be achieved alongside environmental improvements by changing policy. These changes in policy however should sit within existing environmental and social values, allowing existing targets (e.g. emissions reductions) to remain, and keeping in line with public opinion. They argue that we need top-down policies to ensure collective choices towards achieving public goods outcomes. So where individual’s personal interests are not aligned with those of public (collective) interest, top-down policies are needed.

Firstly, I find it odd to assert that this doesn’t involve a change of values. Within the policy framework, values are incorporated into deciding what needs to be tackled, setting goals and targets therein, and in deciding how to achieve them. I find Sabatier’s Advocacy Coalition Framework’s distinction of different types of policy beliefs to be a good way into thinking about this. In this instance, the values being changed are around the way in which policy should be formulated and implemented. Top-down policies incorporate implications on the way in which democracy is exercised. It is a move away from current trends towards participatory forms of policy-making and implementation, which seek to empower people and democratize decision making. It is a change in values in this regard.

Secondly, I just don’t think that top-down policies are effective in securing individual behavior change. Examples from my own research show that where individual beliefs or interests do not align with that in policy, individuals will act against a policy. There is a sizeable environmental policy implementation deficit across the EU (and beyond!), and such mismatched interests contribute to this. Indeed, it is an underlying rationale to the participatory turn in environmental governance; by engaging with individual’s interests, we can increase legitimacy, buy-in and efficacy of policy. Without such commitment from individuals, we instead need some way to strongly enforce top-down policies.

My overall discomfort with the article (and specifically this section) is therefore what is implied by the extension and application of this techno-fix rationale. Do we really want to introduce a dictatorship policy approach with strong enforcement (fines, sanctions)? Or would we rather work with people, and specifically with people’s values? I personally feel that engaging with people’s values would be preferable. A specific value to engage with would be the idea that individual’s income maximisation should take precedence over meeting public interest (and/or that economic growth should be our overall goal!).